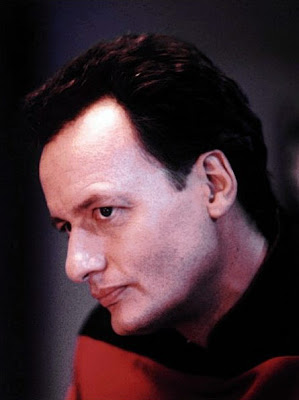 The new Star Trek movie, is a real good movie.
It parodies very well Star Trek, it even has a classical redshirt and mixes it with great special effects and action. Mel Brooks could have done it, like he did Space Balls.

But at the same time, and because he did not make this film, they completely reset Star Trek.
They updated it, or abused it to the point where they wanted it to should have started, in the first place.
More simple, more action oriented, and with a lot of sci-fi fandom hood (= customers)!

Gene Roddenberry built up their fandom hood, even if they had to accept an idea, which was back then, still too "intelligent" and "boring". But they did not care, because after the old good Gene is dead twenty years, we can go back in time, alter history, use his fans, as cash cows, and re-write and re-sell the whole story the way we would have liked it, action oriented, dumb, with a lot of money and special effects, on the safe side, and especially without this enjoying Vulcan, and with us as brute heroic “Humans” (USA… because Chekov and all other non USA/Anglo are dumb).
Now that he died, they could slowly transform it, to that point that they wanted it to have started from, an action oriented sci-fi firework blockbuster.

They killed all the social critical stuff, like questions of death, racism, colonization, cold war/polarisation, black and white drawing, knowledge, feelings against knowledge, all the spirit of the generation who created it, and the utopia with it.
By showing us, that we now can just go back, kill all those good ideas, by just altering the timeline, kill the disturbing Vulcan’s, who were always destroying the show for action and shallowness, and put humanity with its rascistic humanity (= white people) love, into the centre stage, back again, and punch Spock into his logic face.

Leaving no contrast and critical voice against humanity from Vulcan, against humans/white/USA/San Francisco (which was not even harmed by destroying the Golden Gate), anymore.
Because we are the heroes, the REAL travellers, discoverers, hippies, and don’t let us dictate anything from any Vulcan anymore, or any other contrast called, future or equals, there is now only the hero, called Kirk, and Spock is an dumb ass, as well as Chekov (a revival of the cold war, and ignoring of the message Roddenberry wanted to send)... what a pity, that there was so few space to use Uhura as sex object, at least the most western characters Scotty and Bones blended in very well.
No trace of equal crew members from pronounced different backgrounds, working together as great crew of the Enterprise, no one dominating the other, well AWARE that the dignity of each other is their shared capital.

Well as Spock said, we (Humanity/Kirk) have to face death (error), in the Kobayashi Maru but instead we say, "hold it there is some big shit happening, at your home planet Vulcan, and you seem to be incapable to handle it, so skip this philosophical crap, and don’t learn from each others viewpoints, as the original Kirk and Spock did, in Kahn’s Wrath, and just fast forward to the action, because this "creates" money (which doesn’t exist in the Federation. What!? Shit! Just don’t mention it!!!).

Where have all the utopian, sci-fi idealistic hippies gone, who wanted to discover and travel boldly, together on and from all those great worlds and civilizations, by and through each other’s dignity, into a prosperous future! Is this all gone, just because they became frustrated with age, and can't see what they infected us with, and rather destroy it now again?
Do we, their children really have to revive their message, because they right now, tell us, forget what we have taught you!?

Was my education, my idealism for the equality of the worlds and its trek, by my parents really a lucky accident?


Well at least it kept its freshness, happiness, humor and optimism, not letting Star Trek sink into oldness and too-seriousness, but with the price of having no brain.
If they manage to revive the brain and combine it with this optimism of the future, maybe then Star Trek will change the world once again.
At one side it is difficult to kill this well established message of Star Trek, but at the same time it seems as impossible to keep the brain combined with people oriented optimism for life and the future.

But I do not believe that this optimism of the people for life, and the serious dignityful way of exploring, is not combinable.
I realy believe that, because I love humanity and vulcans, because I am a Trekkie!

Prime timeline - is my fantasy, that which most would refer to.


Identity, is the prime error of telling a story.


Who has the right to define what is canon?
Which "Human"-Rights, which Prime Directive, which colonialism, which Federation Charta?

Personalized (his-)story (~ true story, of an universal history, of errors)!
Canon is what you, each one for one self can tell about the time and place. An episode, that is true to you, your error, even if others say it is not canon. It is still a true error, which you experienced, no matter what happened at other places or times (universes/timelines).


Logic & Feelings/Fun, a logical result (error filter) of the linkages of this world and its identities and parties.
Aggression and the need to answer it?
Heroism (Archer) VS(?) Indiv Party (Crew/Federation)?
Which (work & achievement) (heroic) ideologies, drive the Federation, other than the explorations, dance and play of logic and feelings (curiosity, fun,...), and the connections of their worlds!
Where is that ideology?
Has it the same fate as Vulcan?

Prime Directive (old, cowardly, poor code of conduct and representation of time and space, and its shared world, and linkage, as well as its own inspiration)?
Critical Colonialism! Where?!
Was that ever present? Or was it just an intrinsic logic, subversively injected and given playground to be manifested in its message and its children, by the play of the crew(s)!?
Is a new kind of Federation needed?

A kind where the error filter of fun/feelings, is appreciated, but also not being lost in old stupid blindness of the connections, which feelings resemble, and thus would allow blind action!

The Vulcan's were right about the faults of humans, as much as they were wrong about them self, and their logic/errors!
See the linkage, see your prime identity and story.
See the relation, valuing the intrinsic logic and value of each position.
Thus no prime cowardly and decadent directive or logic, or even impulsive self-righteousness anymore.


Till now the Federation carried that intrinsic logic, by playing with their existing extremes, depicted in different universal stories and identities.
But now the answer has to be spelled.
We reached the next level!
The play of logic and emotional action, over a common ideological idealistic cooperation and world, helped to distil these solutions out of the intrinsic logic, of the intelligent position of Gene Roddenberry.

The new logic is now, to SEE, and being able to spell the connection/linkage between logic and feelings, and their causes, and message (intrinsic logic)!!!
Something, old good Roddenberry injected and gave centre stage to be lived and tested (errorised).
It seems we are approaching its final phase, that much that we forget it (and swallow it by blindness and killing Vulcan) or just do not need to distinguish the difference between logic and feelings, and the story, the world, the linkage, that connects them both, any more and gives rise to pure dignified, humane (errorised) logic.


A story and formation I'd like to tell about!
True: Science and Fiction!? 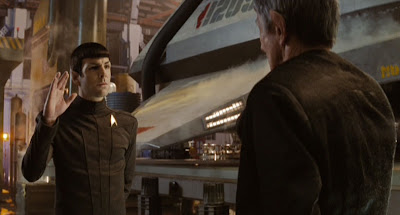