Goodby & "Hallo-Wien"!?: Travelling away from Vienna, errors, a myth, a dream, an utopia? 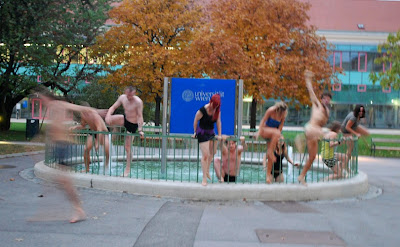 I was this weekend away from Vienna, talked a lot about the movement which is emancipating itself right now, in Vienna!
On the way from and back again to Vienna, we not only discussed all the goals, what this movement wants to achieve, but also what it already has achieved, in only ONE week!
It is already a movement, that seems like it was always there, because it is already so well organised, has still space, and especially a lot of enthusiasm, which seems not to disappear and beeing occupied by one thing (leader/party/topic) in the near future.
This little new world, created a little new space and society, which does not separate itself from other spaces, societies and people, it tries, and has for the first time effectively, in an urban society, achieved, such an open and non hierarchical discussion, about social topics, that much that no one fears it, even if the University is burning, because everyone feels included, not driven out by radicalism, even when the vocabulary is used. Because they are single words, and single people, but not the movement, and that is the vibe that is emitting from this new way of interaction and communication(s).
It seems, that the black & white thinking is left behind, in this space, and all theories get mixed up together, like in a melting pot, but at the same time leaving each and everyone/everything its autonomy, enthusiastically openly discussed, in an open, local and grassroot-plenum.
All theories, from fascism to anarchism are considered, and are used as analytic tools, discussed and voted on.
It is the most essential democracy as far as my knowledge goes!
But I do not want to go further into detailing this “movement”, because it so much in a flow, it is not definable, and will for sure develop some kind of (local and temporal) characteristics, and will change them again fundamentally, and because of that I do not want to go on. Just come, and discuss about your social world and reality, at your plenum. Participate!
But it shows, I would rather say proofs, for almost the first time, that “chaos” or some would call it “anarchy”, I would rather say grassroot-democracy, can really work, and can be a working thing.
It is without person cult, without hierarchy, without absolute theory, without achieving society, everyone participates, no matter which argument, which theory, and lifeworld, and livingreality/-conditions, everyone is welcomed, because everyone is who welcomes them, not one person, or party. We all together discuss and decide, but most importantly generate awareness.
For the first time Austria is filled with discussion, about politics, social affairs, education, etc., without discussing party lines, or anything else, only issues are openly discussed.

And as it seems, this movement, this vibe, is not only an Austrian thing. In the last years and especially year, all over Europe students go out on the streets in masses.
Not only have all the (social) theories reached a degree of presents in all minds, disciplines and social groups, that the black and white, the ideology thinking can be left behind, and can melt together, into a set of analytic tools, by which the discussions are discussed;...
...and not only, has now the generation grown up, which was always shaped by the Hippies, youth, emancipation, mass (media), superstar, and achieving society and culture, and has learned to handle this in a more diverse and emancipative, but individualistic way, together;...
...not only have given all the new technologies this generation, a tool, that is unbelievable powerful for maintaining such an (hopefully sustainable) outreaching movement;
...but it also gave rise to a new kind of creative society, and also politics.

Thus I want to suggest, that this movement embodies for the first time, an open discussions about errors, of positions, at this place, and at that time.
I could imagine a new kind of party structure.
This is a now kind of political style.
It could even develop into a new, parallel way of politics, parallel to party politics, as an political voice, and representation, along with other parties.
Owning its legitimacy by the simple fact, that everyone can participate, without pressure and psychological problems from and by the achievement society, and without hierarchy.

And it also seems that this will not stay a local anomaly. Europe is cooking.
Maybe almost a first new kind of Paneuropean (grassroot democracy) (Bologna Process critic) party-parallel movement, has awakened?

It doesn’t matter what goals this movement has, and if these goals are addressed, it is much more fascinating, what they have already achieved, it is a whole new universe, or utopia, which became suddenly real, and suddenly expands outward, like a new reality creating big bang, which captures everything around it, expanding without borders, with participation.
A vibe and goal, proven to be able to exist and be able to be creative, and a vibe that should not be destroyed and forgotten, but rather be nourished with new and fresh influx of arguments, and opinions, ... discussion, and discussing all its errors.

This was what could be seen from “far” away, and I just wanted to get back, despite the great amount of work, which waits for us, when we ALL want to participate, in forming our world, society, characteristics, errors, reality(-ies), environment(s), space and time, life(s), and together interacting, sharing this world, living!


The following is surely not the "grassroot democracy", which you can see and feel/what I see and feel in Vienna!
This is how it is NOT done, this is NOT what this movement is all about, this is the old way, the initial error:

But still sometimes errors are needed, to initiate something!(?)
... This Perspective, this diverse and multi-/trans-perspective awareness, mindset, openness/tolerance, this playfullness is maybe more, than the single radical action and its style from above, what this movement, this kind of grassroot democracy is all about, and gives it's (nerd?/pirate?) thrust(?)!

...and is this the reason why, THESE reasons are not the main causes!?

One more:
Is it maybe possible, that the people are fed up with partisanship, and the party system?
Is it possible, that in the search for a golden middle, a mass representation; the people are hopefully looking towards the students?
Is there a subconscious feeling, that those lazy students hold a solution to the sickening partisanship? Because it is amazing, that the public and the politics have not really intervened, and just observed and listened, stunned, now for almost two weeks already?!!!
And NOT because they are only harmless nerds, but rather because they embody a new open(-"source") diverse style, which can be felt right now, as a harmless but enchanting feeling, which empowers to get involved into the discussion. Thus harmlessness, but enchanting character, is maybe a quality of the nerd!(?)