McGonigal: Play Videogames, Save The World 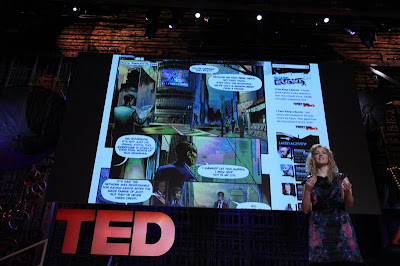 (found at Rock, Paper, Shotgun, forwarded by my brother, thx)
Magnificent speech! I LOVE IT!!!

But like the recent Sid Meier Key note, at the GDC 2010, I have to critically question both speeches, and counter/contrast with the purpose of failure in games, as motivation, especially the rewarding feeling, to experience other feelings than epic feelings, like those she mentions (as allegedly absent in games).
Is the difficulty of a game a reason not to play a game, thus being not a good game because it is too hard? Not necessarily!
It is a good game, but not when it is not playable/masterable, due to broken/unfair gameplay/gamemechanics, and thus its promise (of mastery and enthusiasm, as the believe/faith put into you, and your roles (/worlds), which you (have to/may choose to) be, live, care for, master and thus play², as well as into your (shared) mission/game (see (FF) PRGs))!

In the end it’s not all about generating this epic thing, because games are not about superlatives, but rather about the playful enthusiasm (with the absence of the "opposite to epic" (?)) which puts the game into you, and you into it (along with all other feelings (love, hate, etc.)), rather than unclarity (of the real future and) about what and if you achieve something (/those feelings), when playing/working the mission, the obstacle. Thus it is not about an illusion and lie of the absence of failure and limitations, but rather the boundless enthusiasm to master them (the rules and setting, of the epic mission), a mission you can personally relate to (at least through the reward system, of (e.g.) mastery), and thus becoming a true avatar (rather than a hero). (The opposite of a self- and others-abandoning depression, because it articulates the linkage between the gamer(s) and the play² (adventure/life)).
Thus designing, is rather about creating a great symphony of feelings, and their interaction/interactivity/immersiveness, which create an epic experience. I just think, that epic feelings can be achieved, when they have a personal meaning, because the most epic purposes are always personal, and games are/or should be one of the most personal experiences.
That's the reasons why people play games, why the gamer forms them and the game the gamer, and why they influence the lifes of the gamer, as well as their environments and social worlds around them.
Thus games are not ot postulate, legitimate, and relate the player to the world/other(s)/environment as the hassle-free omnipotent... because that would become boring, especially because it would not be something special anymore, nothing personal, and thus singular.
Because we are all unique players/bodies and a (intrinsic) value, not relatable to others by the value, but rather by our uniqueness, and the personal story which unites us players, empowered by the game, its setting and epically promising challenges it offers (/throws at) us (, and their tribulations, which create our story and thus value and satisfaction of our game, when we master/live/fight/play/dance it, with/by our personal style, and no other!).
Creating one big (shared) epic (personal) gameing eXperiance (life/game long)!
Thus never forget! Reality is the best gaming platform and engine!
Create/dream up/inspire/fascinate/live/share/fight/dance/save/change/eat/feel/see/breath/...
play
your adventure (world).
And visit her epic (*g) Homepage, especially because she will release 2011 a book with the title:
"Reality is Broken: Why Games Make Us Happy and How They Can Help Us Change the World"!